I have a history with herons. We often walk past the Albert Cuyp market in the evenings when it’s closing. A cacophony of clanging metal and clashing boards, workers shout in unknown languages, hurriedly disassembling the stalls. Squeaking and rumbling luggage handling carts turned market carts careen down the street, moving products and materials to their nighttime storage places. Colorful not so fresh flowers lay trampled on the sidewalks. Empty cardboard boxes and plastic bags filled with trash litter the streets. The smell of overripe fruit, stale fried food and the aroma of rotting fish assault the nostrils.

In spite of the chaos, it’s actually my favorite time to visit the market because of the herons.  There are dozens of them, perched on the cantilevered beams of house hooks and on rooftops, on the tops of food carts and on the ground, patiently waiting for the scraps from the fish and chicken vendors. 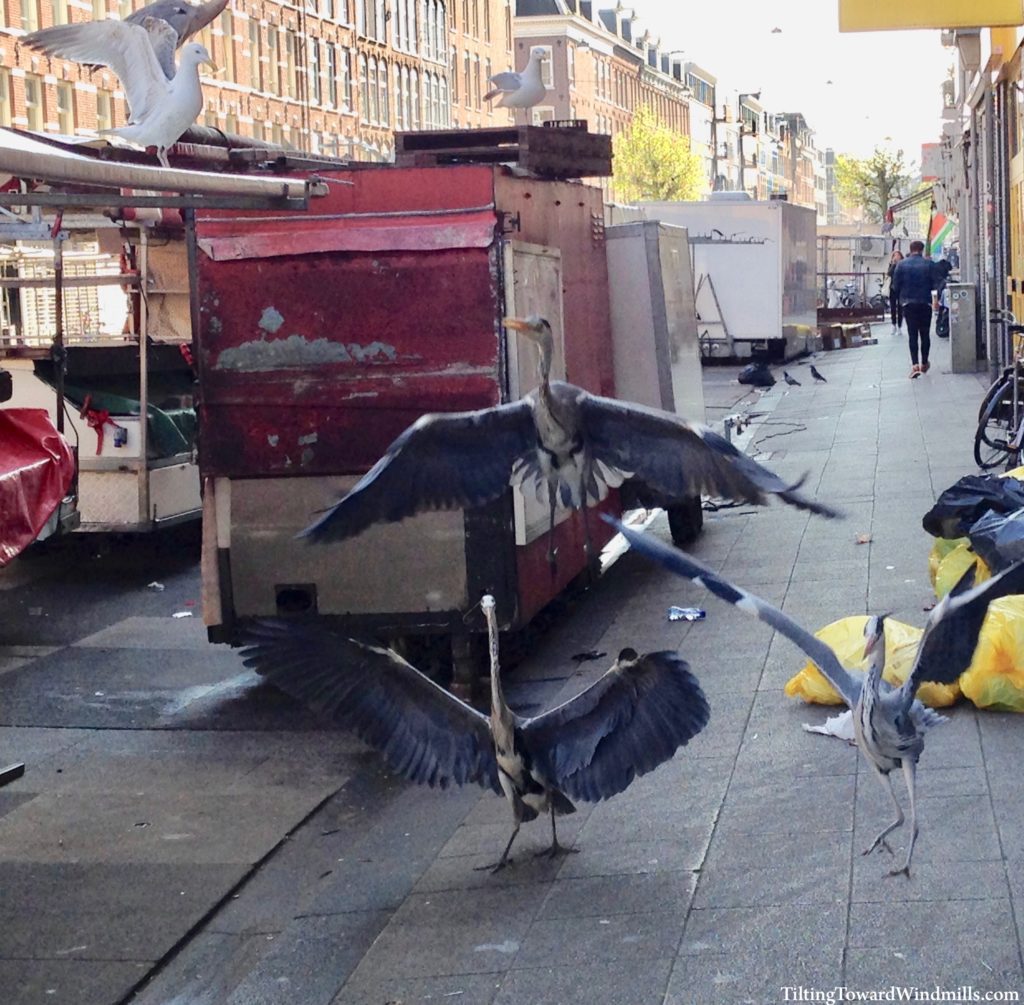 I’m in awe of them, but also a little afraid.  It’s my history with herons.

When we lived in Portland, Oregon, our house came equipped with a small fish pond.  My office window overlooked the pond, stocked mostly with koi in lovely combinations of gold, black and white, but there were a few fantail goldfish.  My favorite was a large, shimmering gold fantail goldfish with large white spots and spectacularly long, flowing fins.

We had a heron that often paid a visit to our pond, usually taking a position on a distant tree or throwing his dark, flying shadow over the backyard, notifying me of his presence while scoping out the activity before moving in for a closer look.  He’d often land on the deck just on the other side of our house, using the side of the building to keep himself just out of my view.  I’d often see him peek just his small, angular head around the house to see if I was seated at my desk, his black plume rustling in the wind. We engaged in this primitive game of hide and seek, I’d run to the corner of the house to catch him hiding, and the pteradactyl would scuttle just around the corner where he couldn’t be seen.  I was always a little freaked out to look up from my desk to see him staring at me from around the corner of the house, stalking me.

One morning, I looked to my right to see the pterodactyl standing with his spindly, pale gray legs in my pond, with my favorite fish, fins still dripping, draped over the side of his yellow-orange, scissor-like beak.   He then turned to look directly at me, as if to say, “See, you can’t outsmart me!” then lifted his massive wings and flew away.   My immediate sense of loss felt like a kick in the gut. He had acted with the ease of shooting a fish in a barrel; I hadn’t even noticed him there.  The fish never stood a chance against those millions of years of heron evolution.

Regretfully I dragged the heavy plastic cover, intended to keep small children out of the pond, back over the fish pond.  I couldn’t see much of our beloved fish through the cover, but at least the rest would live to see another day.